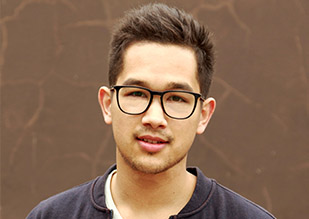 What have you been up to since 1 year? Can you tell more about your new video: Wok ?

Chris Chung: Since my last chat with YDA I have kept up the branded and advertising content, along with developing, producing and directing the pilot episode for ‘Wok’ mine and Bruce’s (Chong) new hopeful show. More recently I was 1 of 6 directors selected for this years ‘Directors UK: Challenge Alexa’ where we each made a short project surrounding a comedy aspect, I decided to go down the martial arts comedy route.. we had heaps of fun on that.

What is the genesis of the story?

CC: ‘Wok’ is based on the upbringing of Bruce Chong, my partner in crime for ‘Wok‘ and one of the leads in the show which we’ve been developing. Shot on location in Hackney we feel we have captured the essence of running a Chinese takeaway in East London. The show connected with me from a cultural view and I’m quite surprised there hasn’t already been something like this here in the UK.

Can you tell us more about your background?

CC: I studied Film & Broadcast production at London Metropolitan University from there on I started in the camera department on commercials, building my knowledge of how a set works and the various roles. I started working on my own projects by branching out, fortunately I have come to meet and collaborate with many creative and hardworking individuals that are just as passionate about film. Myself and my team have since gone onto feature and win in a variety of film festivals from the BFI Future Film Festival, Raindance Film Festival, Virgin Media Shorts, L.A Action on Film Festival and now I’m looking to develop my debut feature film.

Who are your artistic influences?

CC: I have many influences from artwork, culture, true stories, day to day experiences which I tend to borrow a lot from as well as inspiration from some of my favourite filmmakers. A big one I’m starting to realise for me is location, how the characters and camera may interact with your surroundings and how a narrative can be built into the space.

The YDA has launched a new category, Changing The World Frame By Frame. Are you interested in making a documentary?

CC: Very interested, I’ve had the opportunity of making portrait films on artists before but just haven’t had the time to invest in the research and commitment of a documentary. Certainly on the list of things to do as I am a big fan of documentaries, I just need to find the right topic to start!

Right now everyone’s talking a lot about VR technology. What is your point of view?

CC: I think it’s a very interesting medium and have experienced a VR demo myself, I’m not the biggest fan for now. I feel that by being able to poke your head in whichever direction takes a lot away from the filmmaker and how much they’d want to reveal to the audience member. Although if the narrative were to adhere in someway to the technology it could work, I’m not sure how you could light or hide the things we usually need to on sets! I’m not a big fan of 3D either, isn’t it odd wearing headgear to watch something?

Any advice for future filmmaker ?

CC: Just get started. Get involved and start learning the craft, I came into film and production when the RED ONE first came about and saw the transition the Canon 5D brought to the game. With the technology and cameras being so readily available now, there really isn’t any excuse to not be out there shooting. Also be collaborative, work with those around you and build a team of comrades you can go to war with!

Young Director Award 2021 entries are now OPEN! Get your entries in before April 1 to  More…

In our final winners interview for YDA 2020, shots Co-Editor Danny Edwards is talking to  More…

Meet The Winners: You Are Here UK

In our penultimate winners interview, we’re with shots Co-Editor Danny Edwards, as he talks to  More…