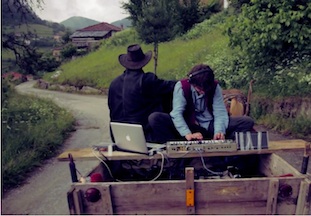 Collaboration is the essence of all good film making and here we explore the relationship between musician Cosmo Sheldrake and new director Ruben Woodin Dechamps,  a creative partnership which is producing wonderfully eccentric and magical music films.

Cosmo, your music feels a mix of spiritual and fun, ancient chants and contemporary electronica. It also feels deeply informed as if your DNA is steeped in making music. What were the key influences that led you to becoming the type of musician that you are? A potted history please of key revelatory moments of your creative life. Has your musical work evolved spontaneously or was their a conscious decision you were going to become “a musician” rather than “something else”?

It’s a hard question to answer. I have been very lucky to have had some fantastic musical mentors in my life.

Also, I have always played music by ear, and still can’t read music. I then started learning blues piano when I was seven, and got really into improvisation. I had a fantastic music teacher who was a giant of a man, who always wore loud suits and swore, he wouldn’t take any shit and was nothing but a positive influence. He could teach about twenty different instruments, and I think was one of the first to inspire me to learn lots of things.

Just listening to music has had a huge impact, I remember listening to a Keith Jarrett’s the “Koln Concert” when I was twelve, this changed everything, his sense of melody blew me away, I stopped having lessons and just improvised, which I still do.

If I was going to try and boil it down to a moment, then it was when I was about sixteen and fell in love with the piano, I just went up and down playing every note individually for hours, this was the moment I realised that I was completely in love with music.

But I never thought I wanted to be a musician, it was just something enjoyable. But I seemed to spend more and more time playing music and it just sort of happened.

How did the working relationship with Ruben Woodin Dechamps and making the films together come about? Was it a desire to create an extra visual evocation with your music or was it simply – as with traditional music videos – a means to promote tracks?

It started when I wanted to make some sort of music film thing, and talked to Ruben about it, he suggested finding a laundrette to film in which I promptly did. It was not exactly a means to promote tracks, even until the night before I didn’t know what I was going to play in the film. I think it was more an exploration of performance and place. It became more about performing to places themselves. We also explored ways in which we could visualise the music making process in more depth and experimented with making films that document both the performance of the music as well as the gathering of the sounds that made it.

The disparate settings play an important part in your videos – does an idea for a film begin with the location?

The process begins with finding the right location to complement the tune, going into active working environments with their own developing narratives. There is a real pleasure in turning up in someone’s everyday workplace, playing them a ditty and capturing this atmosphere for the film. With sessions like The Fly it was important that we captured and valued both processes in the same light, as Cosmo played and they fished.

In fact, the environment becomes part of the earlier films’ narratives whereas 1/4 is a more experimental film than the others technically both visually and musically.  Cosmo’s music was recorded four times faster whereas Ruben’s video captures his performance four times slower in slow motion and the street location is merely a backdrop not an interactive setting.  What prompted this shift of style and how do you see this experimental work evolving?

Having played a lot with the sense of place in the videos we wanted to try working with time, so essentially to both art forms yet utterly different in how far they can be pushed.

With previous videos there has been some sort of link to a release or formalised song, we wanted to take the process back a step and experiment without the pressure of it having to turn out a certain way. I had a good camera for a week and set Cosmo the challenge of playing everything four times faster so we could shoot high frame rates.

There is huge room for development from this early experiment with varying frame rates and pitches, at the moment the soundscape is very abstract and it would be nice to reign it in a little.

Ruben, what are the most challenging aspects of making the films and how do you resolve them?

We’ve built up a solid collaborative approach now and so the biggest challenge in these videos is finding the right location. Cosmo’s audio setup is ideal as you can go into the most hectic of environments and get good sound. Ratchet strapped to the bonnet of a jeep as it follows Cosmo down a Bulgarian mountain in-between thunderstorms, utterly insane. Shooting The Fly was by far the most madcap, dealing with the spray, spitting cuttlefish and waves on our tender electronics! Out of this chaos came an amazing workflow, the fishing crew could only work into the wind which turned out to be the best light and biggest waves. Using the waves was a great shooting experience as you can get some very interesting shot choreography.

Do you meticulously pre-plan before the shoot or does chance play a role in your videos?

Once our producer Orban has secured the location most is left to chance. There are currently no budgets to create the films so it’s really all about pushing ourselves creatively and having fun doing it. We operate as a trio and shoot on Canon DSLRs with zoom lenses to give more options within the take.  To capture the atmosphere of live performance I feel you have to approach the camera as an instrument, then all you have to do is get in rhythm and jam along with the performer. The only sessions we lit were in the pigsty, it’s nice to impose as little as possible so that the locations we choose can still function as they normally do.

How did you become a film maker? Self-taught or film school?

I got into film through running on grime music videos in London and went on to study performance art in Brighton. Throughout uni I shot a lot of experimental work and kept working on bigger shoots to pick up skills. Now I work mainly as a DP with the occasional bit of directing.

Please tell us about Gallivant Films and its ethos.

Me and Orban and two good friends run Gallivant Film. After an age of deliberating on a name ‘Gallivant’ came up and pretty much hits it on the head, ‘to go around in pursuit of pleasure or entertainment’. Being at art school and seeing endless over intellectualised internal projects frustrated me, being creative should be a total celebrated collision of disciplines.

Dreaming up the most madcap ambitious projects within our means, creating parameters within which spontaneity and chaos can reign, the projects with Cosmo show that nicely and we hope to get support to do many more!