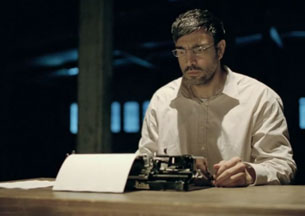 Shooting spec spots is, well, speculative but sometimes when the film is extra good the client will pick it up and run with it. Andreas Roth directed a social ad for the safeguarding of freedom of expression during his first year at film school and now it’s to be released in cinemas.

How did the idea of “Typewriter“ evolve?

The basic idea was a man sitting at a typewriter, but you dont hear the usual keyboard sounds, you only hear gunshots. This concept was born by Norman Scholl. Norman is a good friend of mine and was a junior copywriter back then. I told him my visual ideas and visions and then we developed it. In the beginning the spot was planned as a spec. When the film was completed, we didnt want to leave it at that. We contacted the International Society for Human Rights (ISHR) who wanted to use the spot immediately. If all goes well, you can view the spot in cinemas in the near future.

What were the challenges on the shoot?

There were some challenges. The main problem was time. We had two and a half weeks for the pre-production. That was really intense. We shot at night, in mid-December in an unheated, freezing warehouse in Hamburg and Neil, the protagonist, had only a shirt on. The gunshots on the walls, and on the body of the journalists were very time consuming. We had very limited options and no time for repetitions, which meant everything had to be perfect in one or two takes.

Tell us a bit about what you’re up to now and what led to where you are now.

Right now I’m preparing my second spot at the Baden Wurttemberg Film Academy. It will be a horror film, a mixture of seriousness and comedy.
After school I started as an intern at the NDR (a german TV station). A one year internship at Markenfilm, a commercial production, and half a year at the agency Jung von Matt followed. After two years of work experience I applied at the Filmakademie Baden-Württemberg where I am now in my second year.

Any other films you’ve shot?

I shot my first cinema commercial for the Hamburger Morgenpost (a local newspaper in Hamburg) in 2008. The script was created together with a friend and colleague, Miros Lewandowski.
I also shot two spec spots. One for a dating agency and recently one with Jung von Matt. At the moment i cant tell you more about it.

And what’s the five-year plan?

It would be nice if I could expand my reel in the coming years and try out different genres and also to go abroad for a year to gain some international experience. I’ll continue to develop scripts with friends and colleagues and perhaps this will lead to something bigger. I would like to start a “creative collective” where we can realize our own stories.